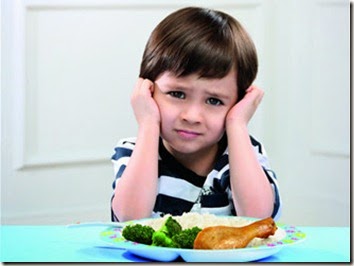 Like many parents, I am well-versed in the world of picky eaters. I would characterize both of my kids as pretty significant picky eaters at age 4 1/2, and one of them was even a finicky eater as a newborn. From birth, he never seemed very interested in eating, and when he did decide to eat, he would get distracted easily by any noise or movement. We were constantly worried about his growth, since he was only at the 3rd percentile for weight, which was well below his more hefty identical twin brother. Eventually, he found foods that he actually liked, and his weight percentiles increased. He is still smaller than his twin, but his weight percentiles now hover around the 50th percentile (hooray for average!). Looking back on it now, I think we probably contributed to his finickiness by always being in a state of worry around mealtimes. But, as parents, it seems it is in our job description to be concerned about the nutrition and health of our children. Unfortunately, this often exacerbates picky eating.

Picky eating typically begins at about 18 months of age, just when kids are beginning to want some control and autonomy in their lives. Try as we might, parents simply cannot control what their children eat, and kids quickly learn this fact. So, although I can't promise today's post will improve your child's picky eating, I hope at least it will help you to stay sane during this phase!
Things to remember: